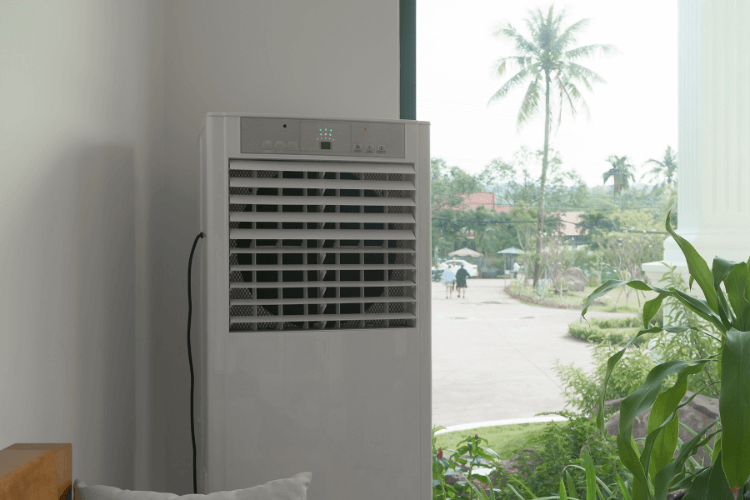 Air Coolers in Cyprus: What You Should Know About Them

We all know how hot it can get in Cyprus during the summer months.

But did you know there are a few ways you can make your air cooler work even better for you? In this blog post, we’ll share some tips on how to get the most out of your air cooler so you can enjoy cool, refreshing air all summer long.

What is an air cooler?

An air cooler, also known as an evaporative cooler, is a simple yet effective way of cooling down your home during summer.

It works by drawing warm, dry air in and passing it through damp pads which then cools the air with evaporative cooling. The cooled air is pushed out throughout the room, reducing the ambient temperature and making it pleasant to be indoors on a scorching day.

Air coolers are also eco-friendly since they consume little electricity and they operate without using any chemical refrigerants or components like compressors that harm the environment.

Let’s go over the three most common types of evaporative air coolers.

A direct evaporative air cooler, also known as a ‘swamp cooler’ work by taking in warm, dry air and cooling it down before releasing it throughout the room.

Outside air is pulled through a dampened pad, which evaporates the water and is forced outside, producing cooler, humidified air that is then circulated in your space. Not only does this provide relief from the heat, but it also adds moisture to the air for more comfortable conditions.

Such air coolers rarely require maintenance and most of them are portable without needing installation.

Unlike direct evaporative air coolers, indirect ones don’t produce humidified air for your space and they usually aren’t portable either. They’re often installed in certain places where air conditioning isn’t feasible including restaurants, shops and industrial areas and they require a duct system in place to operate efficiently.

They’re called ‘indirect evaporative air coolers’ because the hot air and cold water don’t come in direct contact. The way they operate is a two-stage process where at first hot air is trapped in the inside and the cooler uses ambient water to pre-cool the inside of it. While a second hot air stream comes through the cooler it turns cool instantly and is forced out as cold air.

Mounted air coolers work in a similar way to direct and indirect coolers where they turn hot outside air into cool air for your house or office.

As their name implies they should be mounted, and there are three popular ways to go about it:

Which cooler is best for cooling a room?

These are three different types of coolers worth looking at before buying your air cooler.

These are some of the most popular coolers to have at home as they are smaller than others and you can move them from one room to another in your house. They usually work as direct evaporative coolers that turn hot air into cold humidified power to cool down your room.

Tower coolers are powerful and can be used in larger rooms in your house or spaces where events take place; they’re designed to push air vertically which in practice means the room cools down faster and for longer.

They also operate as direct evaporative coolers; desert coolers are ideal for places with low humidity. They have three sides with pads that are regularly wetted with water by a pump that is built into the air cooler. This way they turn bigger amounts of hot air into cold faster.

Where is the best place in a room for an air cooler?

It is important to position the cooler near a window or door so it can pull in cooler air from outside.

If you place it facing a corner may also help the fan blow air farther and better circulate cool air throughout the room. Make sure that there aren’t any items blocking direct access to this window or door.

Ideally, you should place the air cooler as far away from appliances and electronics as possible – these devices generate heat and will affect how well the unit performs.

Another good tip is to place uncluttered furniture around your cooler helps to create airflow channels that allow cold air to spread throughout the room more evenly.

What are the differences between an air conditioner and an air cooler?

An air conditioner and an air cooler can both be effective at cooling down a room, but they have some distinct differences.

The main difference between the two is the way they work:

an air conditioner removes heat from the air which often results in dry air in your space while an air cooler works by cooling and humidifying the air in a room.

Air conditioners use refrigerant coils and a compressor to cool the air indoors, whereas air coolers work by blowing fresh ambient air over water-saturated pads which evaporate.

Unlike air conditioners, air coolers are portable and don’t need installation – all you need to do is plug them in and they’re ready for use.

Do air coolers use a lot of electricity?

In particular, air coolers normally consume between 0.2 and 0.5 electricity units per hour which are little compared to what air conditions consume (1.5 units per hour).

Since the demand for electricity spikes with most homes and businesses trying to keep their houses and offices cool during the hottest part of the summer – maximum temperatures soar (they can go over 40 °C in July and August), it’s wise to look for methods of saving on electricity bills.

The average household has paid €60 extra on their bills in June and July 2022, according to statements made by the association’s president, Marios Drousiotis, to the Financial Mirror.

“According to official data, the average household uses 800 Kw and spends €300 on its most recent bill for April and May. Now, they’ll be looking to pay €360,” Drousiotis added.

Having an air cooler can be an effective way to save money on electricity bills.

Do air coolers work as well as air conditioners?

Air coolers are popular for those who don’t want to spend money on repairing their malfunctioning air conditioner, or just want an alternative cooling device.

While air coolers do provide a source of cold air in hot temperatures, they generally aren’t as powerful as AC units. Air coolers are great for taking off the discomfort of acute heat by dropping the temperature of a room while air conditions can completely cool down a room thanks to their potent refrigeration system that consumes lots of energy.

Unlike air coolers, AC units can both cool down and warm up a space, depending on the temperature you desire each time.

Which is better: an air cooler or a portable air conditioner?

If you live in locations with over 20% humidity, an air conditioner is preferable. But if the area you reside in is dry an air cooler should be the better option. Another thing to keep in mind is whether you can cope with dry air in your space. Breathing dry air can cause respiratory issues such as asthma, sinusitis and bronchitis. Because AC units produce dry air it would be better to opt for an air cooler instead.

Is an air cooler worth buying?

Air conditioners may offer relief, but if you’re on a tight budget or have limited space for a unit, an air cooler could be an option.

They are relatively inexpensive, small and easy to operate. Plus, they are more sustainable than other cooling systems because they consume less energy. Yet even though they don’t provide as powerful cooling as an AC unit, they still do a fair job of providing relief – especially in smaller rooms.

They come in various shapes and sizes, so you can find one to fit nicely into almost any space.

What’s the price of an air cooler in Cyprus?

Fortunately, you’re spoiled for choice when it comes to buying an air cooler in Cyprus.

Their price range is between €190 and €500, depending on the special features each air cooler has such as a 24-hour timer, touch screen, remote control, airflow capacity and wind speed.

What makes them appealing to many is the fact that their maintenance cost is relatively low and they don’t need installation from a specialist which translates into spending more money. Just plug it in, make sure it has enough water flowing inside and you’re good to go.